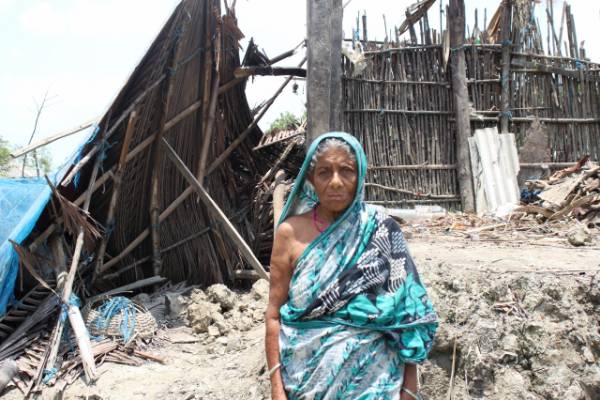 This year’s cyclone Amphan has been no different. According to an estimate by the National Disaster Management Council, the cyclone caused damage worth USD 1.5 billion to housing, infrastructure, fisheries and livestock, water resources and agriculture.

Some of the most extensive damage was suffered by the five Prosperity districts in the southern coastal region, namely Khulna, Satkhira, Bagerhat, Patuakhali and Bhola.

More than 700 villages in 58 selected Prosperity unions under 16 upazilas in the southwestern region have suffered damage in various degrees. Of these villages, 276 have suffered extensive damage, 193 moderate damage and 238 villages minor damage, according to preliminary data sent by the Prosperity partner organisations in the respective areas.

Sayra Begum, of Gabura, is one of the worst affected. With virtually nothing to call her own, the 60-year-old widow lives in 9 no. Sora village in Gabura.

Cyclone Amphan has completely destroyed her house, forcing her to live under the open sky. Sayra has no clue when and how she will be able to repair the house. For Sayra, who struggles to manage even her daily food, it has become an added burden.

The livelihoods of extreme poor people have already become uncertain because of the economic slowdown due to the COVID-19 pandemic. The impact of Amphan on top of that has made the coastal extreme poor completely destitute.

At the moment, Sayra is facing serious food and water crisis. “Who will give us some food and a shed over our head?” asked Sayra, a potential Prosperity member.

The impact of super cyclone Amphan has been analyzed based on Sentinel 2 data acquired on May 22, 2020. Sentinel-2 is an Earth observation mission from the Copernicus Programme of The European Space Agency (ESA) that systematically acquires optical imagery at high spatial resolution (10 m) over land and coastal waters. The maps show pre-conditions of coastal five districts (Satkhira, Khulna, Bagerhat, Patuakhali and Bhola) as well as the impact of super cyclone Amphan. The results are elaborated in the following tables:

The Prosperity programme, jointly funded by the UK’s Department for International Development and the European Union, supports extremely poor people to connect them with the mainstream economic growth and create income-generating opportunities for their sustainable development.

The programme aims to lift 1 million people from 2,50,000 households out of extreme poverty by March 2025.