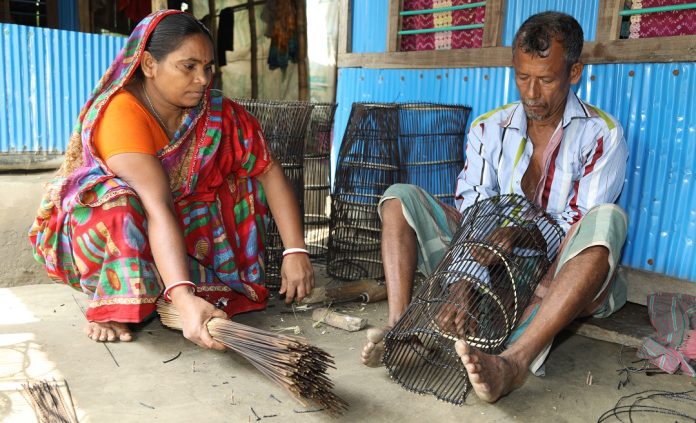 Despite having various income-generating skillsets, many extremely poor people find it difficult to make a living for the lack of an initial push.

Krishna Dhar, of Khulna’s Terokhada, is one of them. A climate-vulnerable area prone to cyclone, tidal surge, and salinity, livelihood options here are few and far between. So as a young boy, Krishna Dhar learned making fishing gear, a trade he later took up as his living.

But although he mastered the skills quite well over the last 25 years, he often ran out of cash to buy the raw materials – bamboo, threads, straw, etc. During these ‘lean’ periods, he shifted between low-paid daily jobs, mostly in other people’s crop farms.

But now in his late 50s, this back-breaking job proves too exhausting for him. Krishna Dhar wished he had a little money to invest in his fishing gear business.

That initial push for Krishna came in the form of a grant of BDT 18,000 from the Prosperity project in early 2021. The support came as a big relief for Kirshna Dhar, who used the money to procure a sizable volume of the required raw materials. His production multiplied overnight, and so did his profit margin.

A key reason behind Krishna Dhar’s higher profit margin is that he has direct linkage with the local market. The linkage-building support under the project ensures that micro-entrepreneurs like Krishna Dhar can sell their products without having to go to the middlemen, who eat up a significant share of the profit.

“Now I do not need to worry about capital. But more importantly, because of my direct linkage with the market, I can sell my products within hours most of the time,” said Krishna after selling all his fishing gear at Sheikhpura Bazar in October 2021.