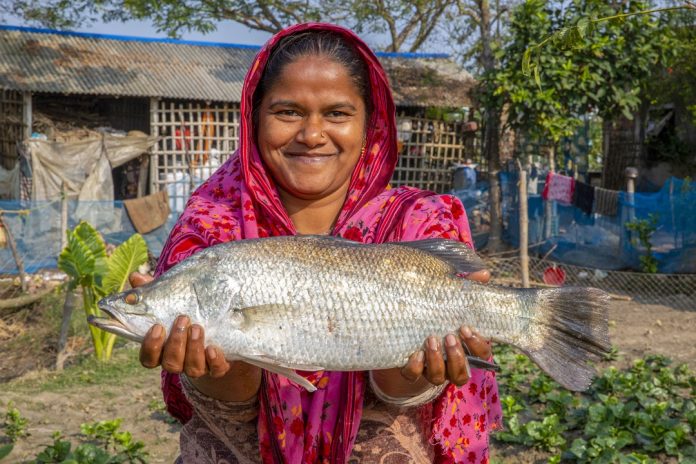 The impacts of the devastations often last long, as many poor and extremely poor people lose their homes and other belongings along with their livelihood options. In the coastal area in particular, farm cultivation is difficult due to salinity and contamination of water resources in the aftermath of cyclone and tidal surge that floods farmland with saline water. The combined effects make them even more vulnerable as they face food and nutrition insecurity, leading to poor health, frequent illness and, resultantly, low productivity. The end result is often an intergenerational poverty trap that is difficult to break.

PKSF’s Pathways to Prosperity for Extremely Poor People (PPEPP) project tackles this in a holistic approach. To ensure household food and nutrition security as well as to enhance household income, the PPEPP project, which is aligned with UN’s Sustainable Development Goals (SDGs), transfers climate-smart farming technologies and adopts off-farm income generating options. The suitability and potentiality of these IGAs are determined through a combination of field experience and Geographic Information System (GIS)-based livelihoods and hazard mapping. Additionally, the project promotes Reverse Osmosis plants and rainwater harvesting in tanks for household consumption. Through early warning system, training of community people and community leaders and climate advocacy with local government officials, the project mitigates the impacts of climate hazards and ensures post-disaster rehabilitation for the affected community.

Hazard mapping and livelihood mapping:
The PPEPP project, Prosperity for short, implements all IGAs based on intensive livelihoods mapping and hazard mapping. The mapping is done after determining the appropriate livelihood options and the potential hazards in a given agro-ecological zones. The purpose of the mapping is to identify the farm and off-farm based livelihood options most suitable from the agro-ecological, economical and nutritional perspectives of different geographical conditions of the project working areas.

Among other things, the main criteria considered for conducting this GIS-based mapping include seasonality, suitability or adaptability, environmental advantage, growth potential or risk, simplicity of implementation, health and nutrition benefit, input availability and market. The project has prepared GIS-based hazard maps for all the 145 working unions and livelihoods maps for 115 working unions.

Climate-smart livelihoods:
Guided by these livelihood and hazard maps, PKSF and its partner organisations implement a wide range of farm and off-farm Income-Generating Activities (IGAs) that are able to withstand various adverse climatic shocks. The following farming techniques are particularly contributing to the food and nutrition security of the target households covered by the project:

Disaster preparedness: early warning system:
Much of the Prosperity working area is in climate-vulnerable regions. Those living in coastal areas are particularly vulnerable to climate-induced shocks such as cyclone, tidal surge, flooding and salinity intrusion in their homestead and farmland. These shocks undo their gains and keep pushing them below the poverty line. To mitigate the impacts, the Prosperity project undertakes a series of actions at three phases:

As part of these, the project delivers climate-awareness messages among participants and the local communities through direct training and message-building through billboards set up in public places such as Union Council and Upazila Parishad offices. These billboards contain crucial information to protect the most vulnerable groups such as children, pregnant mothers, the elderly and persons with disability. They also provide the government helpline number for emergency support.

Rainwater harvesting in tanks and water treatment plants:
Bangladesh has made substantial progress in ensuring universal access to improved water, with more than 97% of the population having access as of 2013. But access to safe drinking water is still low at 34.6% (UNICEF).

In the coastal area, salinity is the most serious environmental risk for fresh water ecosystem. Scarcity of safe drinking water is becoming more acute in changing climate situations from the combined effects of sea level rise, changes in upstream river discharge and increased frequency of more intense cyclones and tidal surges. In general, water availability fluctuates throughout the year. Wet season brings massive amounts of fresh water while it ceases during the dry season due to evaporation as a result of upward movement of saline water, leading to rising salinity.

Drinking water sources are also contaminated during frequent disasters such as floods, cyclones and tidal surges that deposit saline water in large volumes, making safe drinking water a scarce commodity in the coastal belt, a Prosperity working area. Women and girls, who are traditionally thought to be responsible for collecting water for household use, are affected disproportionately by the crisis.

PKSF’s PPEPP project tackles this challenge by providing rainwater harvesting tanks at household levels and by setting up Reverse Osmosis Plants in selected working areas to support the entire community. The project has so far distributed nearly 1,200 water tanks, each having 1,500-litre capacity, in southwestern coastal region. Additionally, the project is currently setting up 17 Reverse Osmosis plants in Khulna and Satkhira districts, where potable water is scarce. Each of these plants has the capacity to treat enough open-source water (1,000-litre per hour) to meet the need of about 250 households on a regular basis.

Assistive device for PWDs
Close to 7% of the project participants or their family members have one or the other form of disability. However, a large number of them are fully capable of engaging in income-generating activities – they only need appropriate assistive devices to move and communicate.

The project supports and mainstreams persons with disabilities across the working areas, with special focus in coastal areas, by providing them with the appropriate assistive devices under Disability Inclusion component. These include wheelchair, tricycle, hearing aid, stick, white stick, crutch and special black sunglasses. Depending on the type and intensity of physical challenges of the persons with disabilities, these devices help them to move, hear, see and eventually engage in different IGAs that are suitable for them. Many participants and their family members who received assistive devices are now contributing to their families by performing household chores or engaging in income-generating activities.