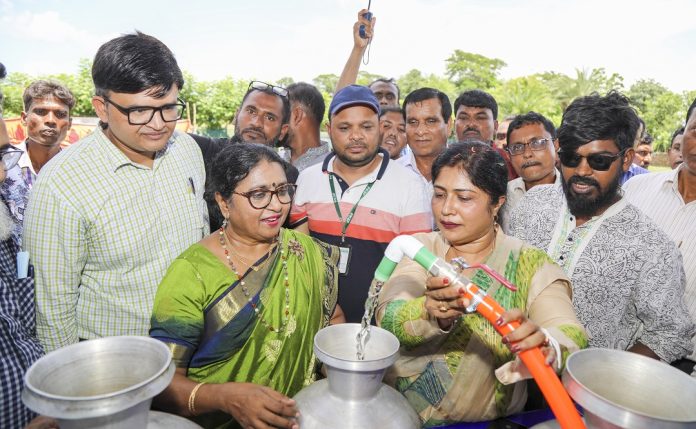 Advocate Gloria Jharna Sarker, a reserved seat Member of Parliament, on 27 July 2022 inaugurated a Reverse Osmosis (RO) plant, set up with financial and technical support from Palli Karma-Sahayak Foundation (PKSF) in Koyra upazila of Khulna, a coastal district that faces serious crisis of potable water due to salinity and rising sea level due to the changing climate.

With this, PKSF has so far installed 70 RO plants to ensure pure drinking water in six coastal districts – Bagerhat, Barguna, Khulna, Satkhira, Patuakhali and Pirojpur – where potable water is becoming a scarce commodity. Seventeen of these plants have been established under Pathways to Prosperity for Extreme Poor People (PPEPP) project. A main feature of these plants is that they collect water from open sources rather than extracting groundwater which is depleting fast.

“In Bangladesh and around the world, tens of thousands of people are facing the challenge of living without access to safe water. Now more than ever access to safe water is critical to people’s health, especially those living in coastal districts,” said Advocate Gloria Jharna Sarker after inaugurating the plant that can produce enough water (1,000 liters per hour) to meet the demand of some 250 families on a regular basis. She called upon the government and non-government organizations concerned to take the southern coastal belt’s water crisis seriously and devise plans accordingly for short-term and long-term solutions.

Speaking on the occasion, PKSF Managing Director Dr Nomita Halder ndc, also a former secretary, reiterated PKSF’s commitment to keep its Water, Sanitation & Hygiene (WASH) initiatives on the top of its development agenda. “Access to water can protect and save lives by preventing various diseases and turn problems into potentials – unlocking the opportunities for education, job placement and improved health. This is why we in PKSF attach high priority to ensuring safe drinking water in communities affected by the potable water crisis,” she added.

Bangladesh has made substantial progress in ensuring universal access to improved water, with more than 97% of the population having access. But access to safe drinking water is still low at 34.6% (UNICEF). Scarcity of safe drinking water is becoming more acute in changing climate situations from the combined effects of sea level rise, drop in ground water level, changes in upstream river discharge and increased frequency of more intense cyclones and tidal surges. Drinking water sources are also contaminated during frequent disasters such as floods, cyclones and tidal surges. Women and girls, traditionally thought to be responsible for collecting water for household use, are affected disproportionately by the crisis.

To ensure drinking water in crisis-hit regions, PKSF has so far undertaken nine initiatives involving nearly BDT 49 crore, including distribution of rainwater harvesting tanks, establishment of RO plants, distribution of safe drinking water after natural disasters and establishments of deep and shallow tube wells as well as supply pipelines in different districts, including in the hills.