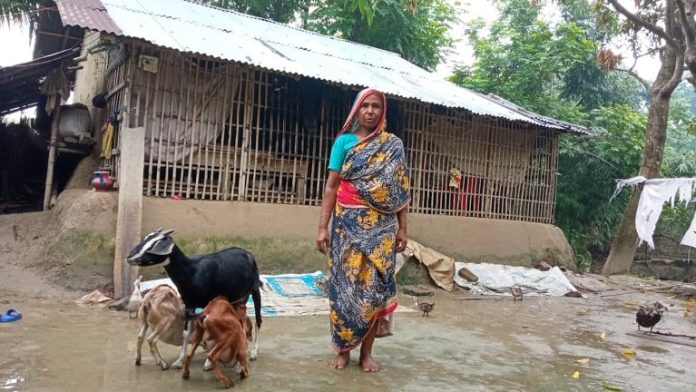 Married at 12, Jamila Khatun was left by her husband after their second child was born about 33 years ago. Ever since, she has been mostly on her own, raising the two children – a son and a daughter, who has cognitive and intellectual development issues since birth – by working as a day labourer. In time, her son started living separately after his marriage, leaving Jamila with her disabled daughter. Jamila, now 59, continued to work on a daily basis, while also taking care of her disabled daughter, who she heard is autistic, although no diagnosis has been done.

When the first wave of coronavirus disease hit Bangladesh in early 2020, she lost her work as she could not go out due to restrictions. With no income, Jamila, from Satkhira’s Ashashuni, was faced with serious food insecurity.

To tackle food and nutrition insecurity in extremely poor households like Jamila’s amid the pandemic, Pathways to Prosperity for Extremely Poor People (PPEPP) project launched a cash support initiative called “Emergency Assistance Programme (EAP)”. Under the initiative, nearly 31,000 target extreme-poor households received BDT 9,000 in three instalments in direct cash transfer through Mobile Financial Services such as bKash, Nagad and Rocket or agent banking. The support was originally meant to provide the vital support to buy food, medicine, and other essentials, although Jamila, like many others, invested parts of the money to buy a goat with two kids as well as some chickens and ducks.

While she still needs to work as a day labourer, the goat, ducks, and chickens meet parts of the household’s nutritional needs. Jamila also earns a little money by selling the surplus eggs. She sees her livestock bought with the EAP support as an initial push towards a sustainable income.

A longitudinal study to examine the effectiveness of the EAP in reducing vulnerability in target households found numerous examples of how this initial push in the form of emergency support eased the immediate food and nutrition insecurity and propelled them out of their vulnerable conditions. The study used a sampling frame of 34,820 extremely poor households across the four geographic regions of the project, and interviewed 681 randomly selected people twice – once at the beginning of the EAP (baseline) and then a follow-up end-line survey after completion of the EAP.

Before the pandemic, about 55% of them were dependent on day-labour for a living across the four working regions although there are regional differences. Other employment options include fishing (9%), van/rickshaw pulling and auto/bike driving (7%), begging (6%), self-employment (6%), small business (5%), and domestic help (5%). Their average per capita monthly income was BDT 1,398 during the baseline survey.

The study found 97% of the initially targeted 34,820 extremely poor HHs received the EAP support. The rest 3% remained outside the EAP due to (a) ineligible HH were eliminated after verification (2.1%), (b) absence of national identification (ID) card (0.8%), (c) and refused to participate in the PPEPP (0.3%). Of the total cash support of BDT 27.5 crore, 95% were transferred electronically and only 5% through direct cash when participants did not have mobile phones or access to agent banking. The transfer was leak-free, additional cost-free and hassle-free.

The support was timely and very critical, as majority of the households (78.8%) used the money to buy food items. As high as 44.7% paid medical bills with the grants at a time when they had no income. As an unintended yet desirable immediate impact of the EAP, at least 57% of the households invested parts of the money in home-based farm and off-farm income-generating activities, eventually boosting their per capita income in different degrees.

Several key indicators of their financial strength before and after the cash distribution point to a positive impact of the EAP on the lives and livelihoods of the target households. During the peak of the pandemic, a large number of them (51.8%) used their savings, borrowed money (73%) from friends and relatives and bought food on credit (82%) to cope with the economic crisis. After the cash distribution, the figures drastically came down to 19%, 62% and 44% respectively, showing significant improvements although other factors may also have contributed to the upward trajectory. On the other hand, their per capita income, which was about BDT 1,400 before the pandemic, dipped by 67% to BDT 468 in April 2020, which again rose to BDT 940 in March 2021. Although it is still much lower compared to the pre-Covid situation, data show that this rise in per capita income was higher in households that received EAP compared to their counterparts who did not.

Consumption rationing was most severe in April 2020, which improved gradually throughout 2020 and early 2021. During the baseline of EAP, it was found that in April 2020, more than 80% of the surveyed households were food-insecure. It dropped to nearly 25% in March 2021 after the EAP support. Findings show EAP resulted in the drop of Household Food Insecurity Access Scale (HFIAS) score from 3.16 to 0.83, indicating an overall increase in food security. For example, during April 2020, over 19% of the extremely poor households had to starve, which gradually reduced, and after the EAP, only 3% of HHs faced starvation in March 2021 although other factors may have contributed to this drop.

Although some of the gains they made over the last year may have waned by now on the impact of the ongoing wave of the pandemic, the PPEPP project’s EAP support indeed resulted in a short-term yet significant boost in their household income and food as well as nutrition security during strict lockdown periods when they had little or no income.