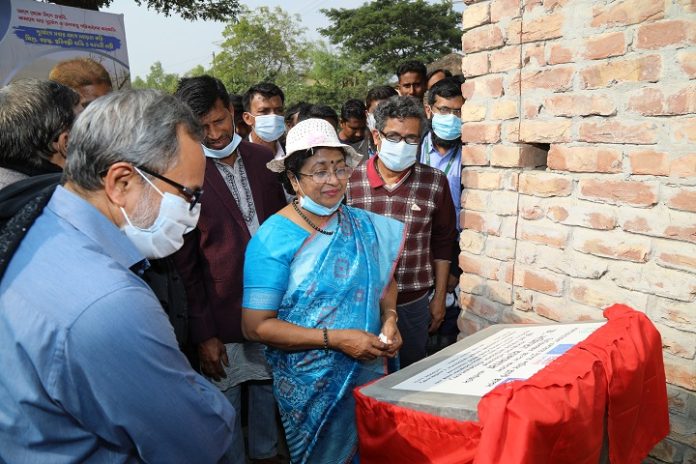 Bangladesh has made substantial progress in ensuring universal access to improved water, with more than 97% of the population having access as of 2013. But access to safe drinking water is still low at 34.6% (UNICEF).

In the coastal area, salinity is the most serious environmental risk for freshwater ecosystem. Scarcity of safe drinking water is becoming more acute in changing climate situation from the combined effects of sea level rise, changes in upstream river discharge and increased frequency of more intense cyclones and tidal surges.

In general, water availability fluctuates throughout the year. Wet season brings massive amounts of freshwater while it ceases during the dry season, affecting groundwater supply, leading to rising salinity.

Due to this increased salinity, sources of fresh water like ponds and tube wells are decreasing. As a result, people are forced to drink contaminated water, leading to an increase in diarrhoea, jaundice, skin diseases and sores.

Women and girls, who are traditionally thought to be responsible for collecting water for household use, are affected disproportionately by the crisis.

Prosperity project responds to this crisis in a number of ways, including supplying safe drinking water to vulnerable households, setting up water treatment plants in communities and providing plastic tanks for rainwater harvesting at household level.

In the aftermath of Cyclone Amphan in May 2020, the project eased the water crisis in Satkhira, the worst affected district, by providing some 2,800 families with nearly 10 lakh litres of potable water in Gabura and Anulia unions. Under the initiative, each household received 16-18 litres of water a day until the situation improved two months later.

As part of this, PKSF Managing Director Dr Nomita Halder, ndc, engaged with communities to learn more about the challenges they face during her recent visit to Bagerhat, Khulna and Satkhira districts.

During the 26-30 December 2021 visit, she unveiled the foundation plaques of two Reverse Osmosis water plants in Khulna and Satkhira where potable water is scarce due to salinity. Once in operation, each plant will produce about 8,000 litres of potable water a day that can meet the demand of 300-400 households.

The affected communities shared their struggle to collect drinking water from far-away villages that takes hours, and they spoke of their need for more potable water sources within their communities.

Ensuring Water, Sanitation and Hygiene (WASH) is a priority of Prosperity project. The Prosperity project aside, PKSF has its own WASH services under its core programmes and other development partner-funded projects to promote healthy life and sustainable growth.

During her visit Dr Halder expressed her satisfaction at PKSF’s field activities in remote areas, and stressed the need for making PKSF services even more accessible to marginalised and vulnerable sections of society.

From 30 chickens to ‘Joyeeta’ award