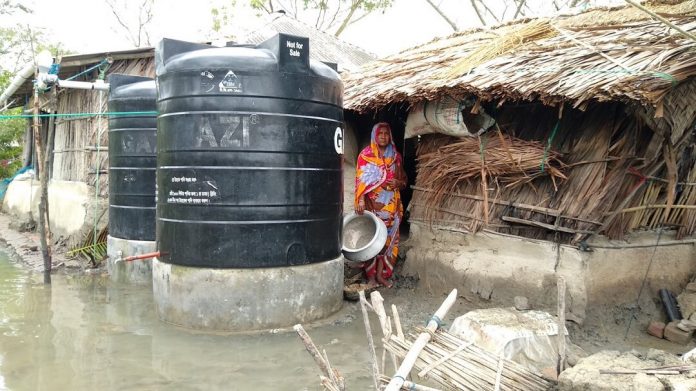 Poverty is a dynamic and multidimensional condition. It is formed by the interaction of social, economic, political, and environmental processes, individual and community characteristics, and historical circumstances (Leichenko and Silva, 2018). The characteristics of the poor or being poor vary within the country and between countries. It is increasingly recognised that, along with other drivers of poverty, climate change poses a serious threat to poverty reduction efforts. Climate change threatens to frustrate the accomplishments of development efforts that are achieved over decades. It also prolongs the existing poverty cycles, increases inequalities, deepens food insecurity, and delays poverty reduction process and sustainable development.

As we know, poor people’s livelihoods are highly dependent on climate-sensitive sectors and they lack the basic infrastructure for dwelling or for services at community level. In addition, many of them live in areas that are highly vulnerable to climate change and prone to climate-induced hazards. As a result, they are affected by disasters disproportionately. In other words, poverty exacerbates, and is exacerbated by, the impact of climate change (Adger, 1999, Khan et.al., 2010). It is increasingly evident from numerous studies that the nexus between climate change and poverty are complex, multifaceted, and context-specific. It is argued that poverty reduction process can be delayed because of climate change if it is not addressed properly.

To ensuring sustainable development, the world is facing a twin challenge: a) expanding economic opportunities for all in the context of a growing global population; and b) addressing environmental challenges which, if left unaddressed, could undermine our ability to seize these opportunities. In the face of pressing economic and environmental challenges, national and international efforts are of critical importance to promote sustainable growth.

The UN’s Sustainable Development Goals (SDGs), a set of 17 goals with 169 associated targets, are now in action. Notably, many targets are linked to climate change one way or the other. Of them, SDG 13 specifically addresses the issue of climate change, which provides an additional threat that adds to, interacts with, and can reinforce existing risks, placing additional strains on the livelihoods and coping strategies of the poor. Unless concrete and urgent steps are taken to reduce vulnerability and enhance adaptive capacity of poor people, and unless these actions are mainstreamed into all development strategies for poverty eradication and sustainable development, it will be difficult to meet some of the SDGs by 2030.

Climate resilience therefore is seen as one of the major cross-cutting issues of the Pathways to Prosperity for Extremely Poor People (PPEPP) programme, jointly funded by the DFID, the EU and the PKSF.

The two million extremely poor people (about 5,00,000 households) under the programme are mainly from marginalised and intersectional groups, such as char dwellers, ethnic minorities, Dalits, persons with disabilities, elderly people and people of third gender. Climate-induced hazards result in both slow-onset and rapid onset natural disasters such as tropical cyclone, high tidal and storm surge, flood, and increased salinity in water as well as in soil. These hazards are all too common in the Prosperity project’s working area (269 unions under 43 upazilas of 15 districts, including five coastal districts), affecting the already marginalised groups even more badly and further increasing their vulnerabilities and social inequalities.

Affected people apply their own resilience strategies, but these often prove inadequate in the face of the increasing severity and scale of climate-related disasters. Rain water harvesting of households with the basic household structure, raising household plinth, keeping a little food, for instance, do little to protect against cyclone, tidal surge or flooding. Very few can save their assets during such hazards. These vulnerabilities to climatic shocks, however, vary from person to person and household to household, depending on their capacity to prevent, cope or adapt such hazards or disaster. Those who fail to cope will obviously fall further down the poverty line, unless we build their resilience through well-planned interventions to tackle climate change impacts.

To build that resilience, as argued in the existing bodies of literature on sustainable climate change adaptation, any interventions must focus on ways of securing well-being, strengthening adaptive capacity, and addressing the root causes of the vulnerabilities of the poor. Adaptation to climate change in many instances aims to reduce social vulnerability at household and community levels.

Prosperity programme is working to improve human capital, reinforc physical capital, help the poor to gain access to natural capital, strengthen financial capital and build social capital – all aimed at reducing social vulnerabilities of the extreme poor households to climate change effects. Accordingly, the Prosperity programme is developing a range of categories of livelihood capital to measure social vulnerability in order to understand the contributions of the programme and to compare between households that are supported by the programme using the Sustainable Livelihood Framework (SLF), which has been widely promoted as a tool for assessing human well-being (Twigg, 2007, Scoones, 2009). This framework assesses livelihood capitals (human, social, natural, financial, physical), which influence vulnerability to shocks, trends and seasonality. Livelihood strategies are determined through these capitals, and these determine outcomes such as income, well-being, and food security, hence reducing vulnerability (Birkmann et al., 2013, Chambers and Conway, 1991). The following Table 1, for example, describes the significance of these social vulnerability indicators to reduce the negative impacts of climate change.

Considering its importance in mainstreaming, all activities, where applicable, should be climate-smart and climate resilience. No activities under the Prosperity Programme will be executed discretely. Climate lens will be used to undertake any activities whether they are related to livelihood development or nutrition improvement. Attempts will be made to make all activities gender-sensitive and disable-friendly as far as possible. The Programme will undertake activities to address the issues related to poverty and climate change. In designing any interventions for the Prosperity programme, the issue of climate change will be aligned with other components, such as livelihoods and enterprise development, nutrition, community mobilisation, gender, market system development and policy advocacy. This is being done mainly through four types of interventions: for example, a) improving institutional knowledge and involvement on climate change b) helping people to cope with climate change and other shocks c) supporting those facing risks posed by specific climate-induced hazards and d) linking vulnerable people with other support systems.