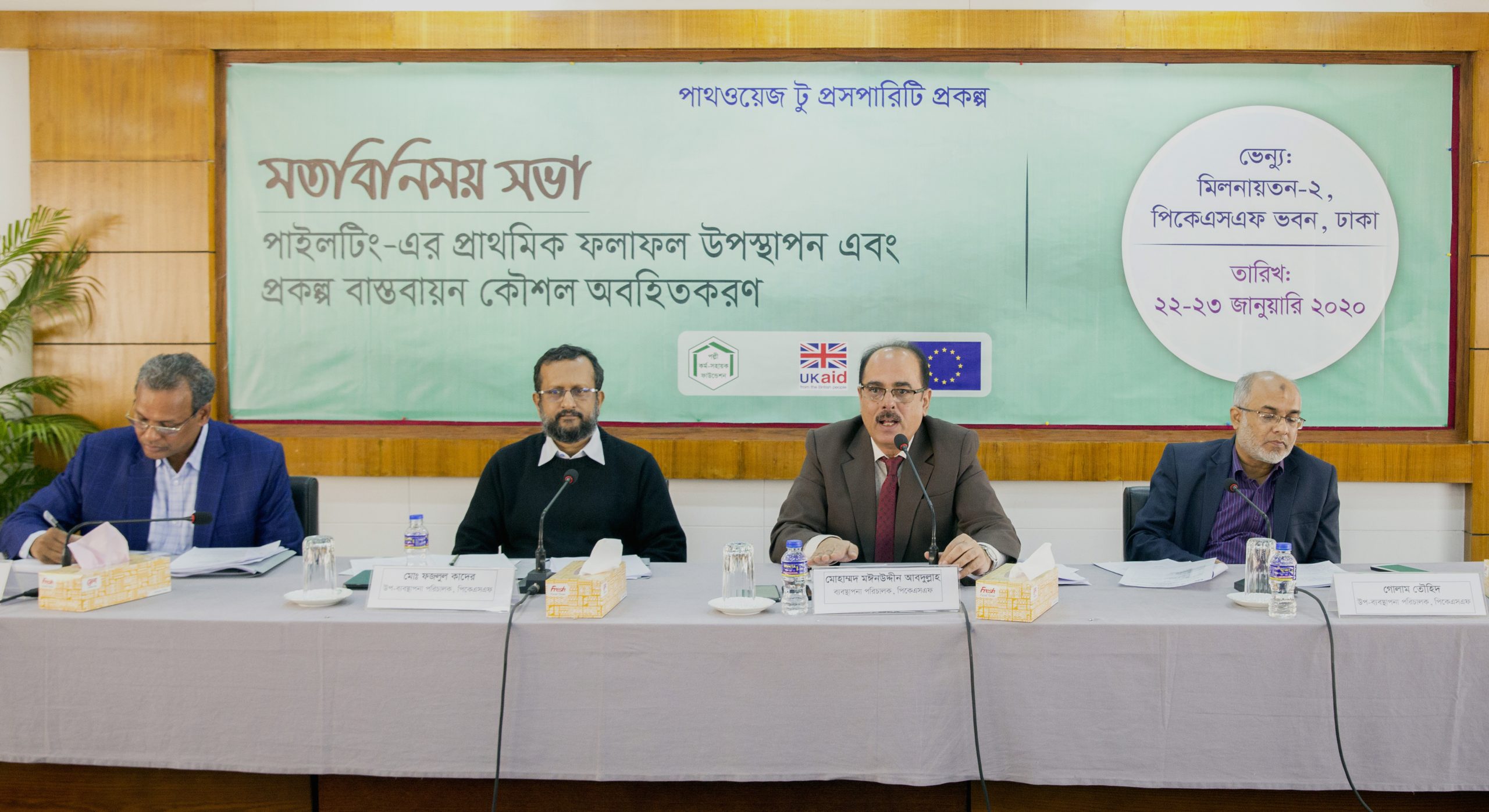 The top management of the PKSF has held a two-day meeting with all the 20 Partner Organisations who are implementing the Pathways to Prosperity project on the ground, to share the lessons learned during the piloting phase and also to give them a set of general guidelines for the project’s Implementation Phase.

The Project Implementation Unit (PIU) established at the PKSF level organised the meeting at the PKSF Bhaban on 22-23 January 2020, with PKSF Managing Director Mohammad Moinuddin Abdullah present at the opening the session.

PKSF deputy managing directors Md Fazlul Kader, Golam Touhid and AQM Golam Mawla moderated different technical sessions of the meeting, participated by the executive directors of the POs or their representatives as well as other senior officials. Most of the PIU staff, including PKSF general managers Dr Sharif Ahmed Chowdhury and Dr AKM Nuruzzaman, were also present.

The meeting came at a crucial time for the project, with the one-year Inception Phase expected to end in March and the five-year Implementation Phase due to begin in April.

The project, jointly funded by the DFID and the EU, aims to lift some 1 million people out of extreme poverty by 2025 by creating wage-based employment as well as self-employment through a range of multidimensional interventions.

Each session was followed by an open discussion and question-answer sessions, when participants from the partner organisations raised various issues and challenges they face on the ground.

Presenting the initial findings during the piloting phase, Golam Mawla, also the project director, underscored the importance of accurate data collection to be able to identify the poorest of the poor in the project areas.

Initial data from some 22,000 households show that about 44 per cent of these people are extreme poor as per the indicators set under the Prosperity project. The indicators include their per capita income and expenditure, number of income-earner in the households, landholding and housing condition.

While the health coverage is poor in these areas, some 34 per cent of those surveyed are still outside of the government’s safety net programmes despite being eligible, Golam Mawla said, presenting the findings.

“There is a general perception that the people in Bangladesh start many things, but never finish them. But in the PKSF, we do finish whatever we start,” he added.

Commenting on the project and its objectives, DMD-1 Fazlul Kader said, “Pathways to Prosperity project is meant to enable the extreme poor people to come out of poverty for good.”

Later in the day, Dr Sharif Ahmed delivered a presentation on the project, its objectives, working area, and the project components, among other things.

Explaining the project approach, Dr Sharif said that Prosperity programme shifts away from the traditional graduation model to a pathway out of poverty, by applying more tailored supports and interventions, both financial and non-financial, for the extreme-poor households. Financial supports will include grants and soft loans.

Owasim Akram, a visiting scholar doing his PhD in Sweden, delivered a presentation on the elderly persons in the context of the Prosperity Project.

After the session, Fazlul Kader said, “There are plenty of scopes to work for the people of all age groups under the Prosperity project. In future, for example, the number of elderly people will increase. And by working for them, we can create a model, not only for Bangladesh, not only for developing countries but for developed countries as well.”

Over the course of the two-day, the three DMDs and the PIU officials gave general guidelines to the POs so they can implement the programme effectively and successfully.

Asking the POs to do everything to avoid mistargeting, DMD-3 Golam Touhid said, “Please make sure that the data you collect is accurate. Make sure that we have the correct information,” he said.

Closing the session on 23 January, Golam Mawla said that the project would have to find those sitting at the bottom rung of the ladder and work for them. “If we can do that, if we can lift them out of poverty, it will be a big victory for us all.”