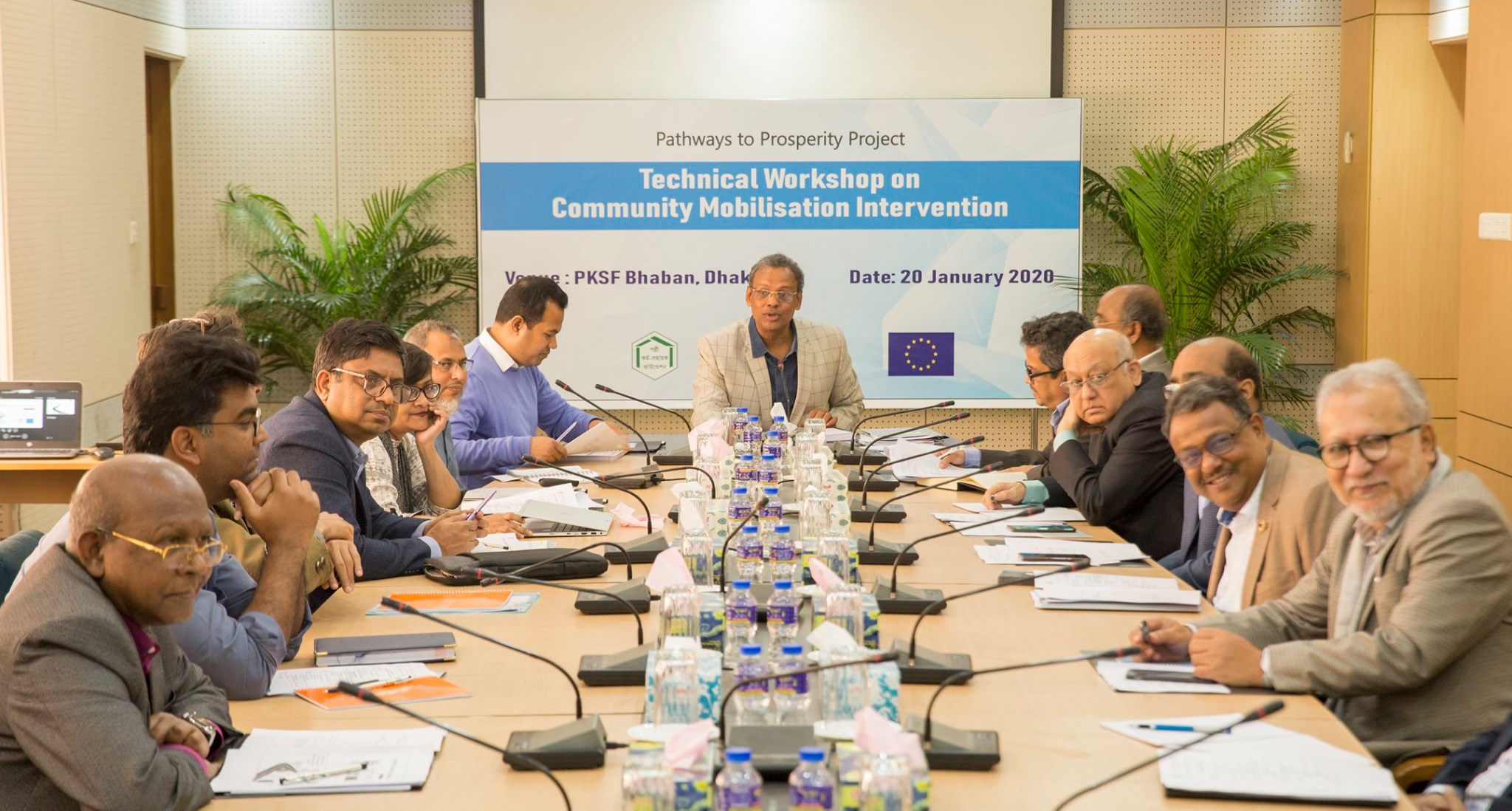 The Pathways to Prosperity project will not only enhance the financial, physical and human capital of the extreme poor households through various flexible, demand-driven financial and non-financial interventions. It will also build the social capital of these households through Community Mobilisation so that they do not backslide into poverty again, PKSF Deputy Managing Director AQM Golam Mawla has said.

The Project Implementation Unit of the Pathways to Prosperity project organised the workshop titled “Technical Workshop on Conceptual Framework of Community Mobilisation Intervention” at the PKSF Bhaban.

The half-day long workshop was attended by the entire Team Prosperity, including PKSF general managers Dr Sharif Ahmed Chowdhury and Dr AKM Nuruzzaman, and three representatives from the DFID, which is funding the project together with the EU.

Opening the session, Golam Mawla, also the project director, said the project shifts away from traditional graduation model, adopting a new approach — Pathways to Prosperity. It aims to build skills and capacity of the extreme poor people to enable them to eventually become successful entrepreneurs.

Presenting the Framework, Community Mobilisation Sector Coordinator Sardar Arif Uddin explained how the Community Mobilisation team plans to ensure various public and private services for the target households. The Framework also addresses the need of various intersections of the vulnerable and disadvantaged groups such as ethnic minority, Dalits, elderly persons, persons with disability, households depended on child labour as well as female-headed households.

The Framework has been prepared in a way so that it also addresses the three cross-cutting issues of the project, namely gender equality leading to women empowerment, disability inclusion and disaster and climate change.

Briefing about the project, Dr Sharif said that the extreme poor people in the target households will receive a range of services from a flexible menu so that they can exit extreme poverty and eventually set up their own enterprises for their sustainable development.

After the presentation, the DFID officials and the five EDs and DEDs of the Partner Organisations gave their feedback on the Framework for consideration of the Team Prosperity.

Tahera also spoke about prioritising the activities under the Community Mobilisation based on the knowledge as to what works and what does not work.

Feroz Ahmed, the Livelihood Adviser of the DFID, said the DFID intends to ultimately handover this “Pathways to Prosperity” approach to the Government of Bangladesh at the end of the project, which aims to lift 2 million people out of extreme poverty in two phases.

“To be able to do so, we have to gather evidence as part of the knowledge capitalisation plan,” he added.

Feroz also emphasised the need for attaching special importance to the need of various intersections of the society such as ethnic minority, Dalits, persons with disability and female-headed households.

Moderating the discussion and question-answer session, Dr AKM Nuruzzaman said, “For maximum results, we need to know beforehand which activities will yield the best impact.”

In his concluding remarks, Golam Mawla said the extreme poor people will require a series of interventions to be able to exit poverty. So alongside providing other services, the Prosperity project will ensure that the target households have increased access to various public and private services.

At the moment, the Project Implementation Unit has been exploring the public services available at the local level, and is planning to start with safety net, education, nutrition, disability inclusion and agriculture extension with equal focus on addressing violence against women, he added.