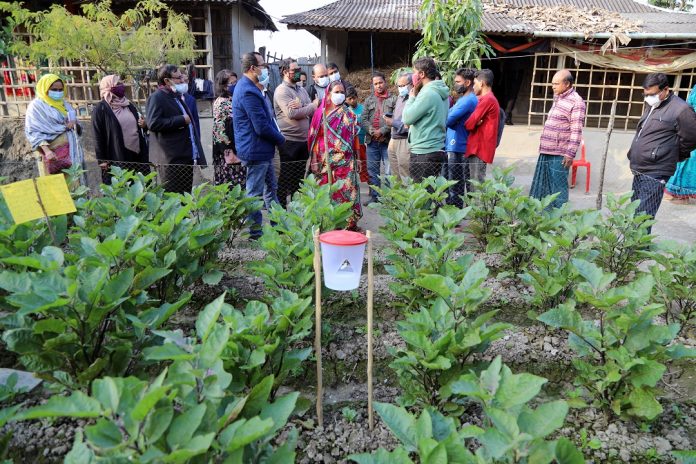 An FCDO delegation visited Prosperity project’s climate-vulnerable working areas in the southwestern coastal region of Bangladesh from 16-19 January 2022 to observe field progress made over the last three years.

PKSF high officials, including the project director, accompanied the team during the three-day visit.

This was FCDO’s third visit to the region. Earlier, the UK’s development organisation visited the coastal belt first before the project was launched in 2019 for a feasibility assessment and then in 2020, about a year after the project started operation for a first-hand experience of field activities.

They also engaged in discussions with local-level government officials about how best to ensure access to various government services for the project’s target households.

Project participants shared with the team how they are benefiting from these IGAs, as well as from their involvement with the community groups (PVCs) that function as their support network base. The nutrition-sensitive homestead gardening and home-based livestock rearing activities, for example, meet their household nutritional demand. They also contribute to their household income, as they sell the surplus produce in local markets with the forward market-linkage support from the project.

The region, frequently hit by cyclones, tidal surges, and saline intrusion, has a serious crisis of potable water. The project is promoting rainwater harvesting in tanks to tackle this, and the delegation visited a number of households who already received such tanks.

In Gabura union, FCDO team visited different IGAs such as broiler chicken, native chicken, layer chicken and goat rearing, seasonal vegetables and fruit cultivation, crab fattening and tailoring. Members were found to be acquainted with the technical knowledge that the technical field staff transferred over the last three years, despite formidable challenges in the field due to the Covid-19 pandemic.

They also visited houses with rainwater harvesting tanks that ease the potable water crisis in these extremely poor households.

As regards the cash support under the project’s Emergency Assistance Programme (EAP), the team spoke with a number of beneficiaries who said the cash grants provided the vital support to ensure their food and nutrition security at the height of the pandemic. Under EAP, nearly 31,000 EP HHs received BDT 9,000 each in three equal installments. Although the support was originally meant to ensure food and nutrition security, many invested parts of the grants money to start small-scale home-based IGAs.

In Gabura, a number of members said they bought sewing machines, while some spent the cash to set up tea shops to enhance their household income, which is below the lower poverty line in most cases. Others used the money to support their children’s education and pay their medical bills at a time when they had little to no income.

Visiting an area where FCDO previously funded PRIME project to tackle seasonal hunger, it was found that many of the extreme poor households who received support under the PRIME project (2006-2016) have now become micro-entrepreneurs, multiplying their assets by manifolds over the last decade.

The FCDO team held a meeting with a number of local government officials, including the Shyamnagar Upazila Nirbahi Officer and other officials who oversee livestock, fisheries, agricultural extension, health, youth engagement, family planning and women affairs-related issues in the community.

The GoB officials expressed their readiness to support the target EP HHs, also a direct result of linkage support from the project.