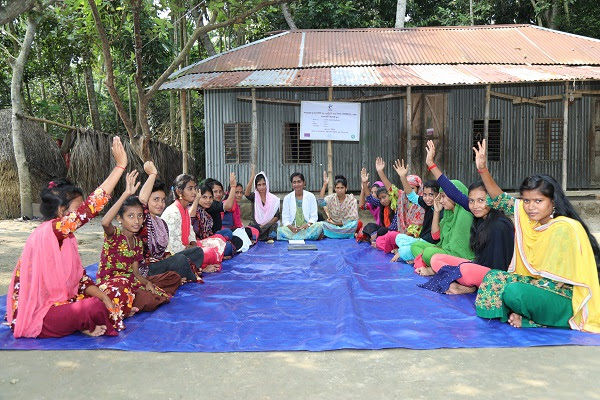 Since the UN Sustainable Development Goals (SDGs) took effect on 1 January 2016 with the theme leaving no one behind, the Bangladesh government has been demonstrating a strong commitment to achieving the SDGs well before the 2030 deadline. To attain these objectives, the government has integrated the SDGs in both the 7th and the 8th Five-Year Plans (2016-2025) with key thrusts on ending poverty in all forms, and eventually eliminating discriminations and inequalities from society. But despite the tremendous progress that Bangladesh has made over the past 13 years, gender inequality persists at different levels, which is clearly visible in times of crisis, including during the Covid-19 pandemic, at greater intensity.

In Bangladesh, women in general struggle to establish their rights in family, in society, and in workplace. Despite having the legal and policy instruments to safeguard their rights, women, who comprise more than half the total Bangladeshi population, still face discrimination, exclusion and injustice, and have negligible influence in the decision-making process in their households, communities and workplaces.

However, women’s opportunities and public participation in Bangladesh have increased significantly in recent decades. For example, significant progress has been made in closing the gender gap in school enrolments both at primary and secondary levels; girls currently outnumber boys’ enrolments. Many women are now members of the local government bodies that have important responsibilities for rural and urban development. The rapid growth of the garment industry has provided a large number of formal sector jobs for women, who comprise more than 90% of its labour force. This has significantly contributed to the textile and readymade garment sector’s share in Bangladesh’s GDP growth to remain at more than 18% over the past decade (Hossain, 2021), according to a keynote paper delivered by PKSF Managing Director Dr Nomita Halder, ndc, making the International Women’s Day 2022.

But challenges remain, and there are quite a few areas of women’s development where the country fare rather poorly. According to the Global Gender Gap Index 2021, Bangladesh ranks 65th in the world in closing the gender gap out of 156 countries. The situation is worse when it comes to women’s economic participation and opportunity (ranking 147th), educational attainment (ranking 121st), and health and survival (ranking 134th). And although gender parity has been achieved in primary and secondary education enrolment, dropout rates are higher among girls compared to boys. The rate of child marriage remains the highest in South Asia with 51% of girls getting married before the age of 18 (average age 16.4 years). About 82% married women suffer gender-based violence, and pervasive sexual violence prevents women from realising their full potentials.

As an apex development organisation working in all 64 districts of Bangladesh through a network of more than 200 partner organisations, PKSF takes deep interest in the fulfilment of SDGs, including SDG-5, through its core programmes and time-bound projects with financial support from the government and development partners. In addition to these programmes and projects, PKSF has a dedicated SDG cell tasked with providing policy guidance to ensure that all development activities undertaken by PKSF are aligned with the SDGs, including SDG-5 that deals with gender equality.

Pathways to Prosperity for Extremely Poor People (PPEPP) is one such flagship project of PKSF. Working in three climate-vulnerable regions and ethnic minority communities, the project primarily targets women to minimise the gender disparity through livelihoods, financial inclusion, nutrition and community mobilisation support. As women disproportionately bear the brunt of climate-induced natural shocks, climate resilience building is integrated in all project activities and service delivery systems to further unburden the women participants and thus allow them to engage in income-boosting productive activities for their economic empowerment. The project is working in the following specific areas to promote women-centric development and further minimise gender disparity and gender violence:

✓ The project makes conscious efforts to ensure that women have full access to the loans they take or have the right to decide on how best to use the money.

✓The project provides a platform for nearly 1 million extremely poor women (250,000 households) to organise, create their own support base and exit extreme poverty.

✓ It reaches out to 357,000 women, adolescent girls and children with a package of nutrition-related interventions to improve their health.

✓ The project extends support related to gender equality to 125,000 women so they experience a significant change in their social status and level of empowerment within the household and community.