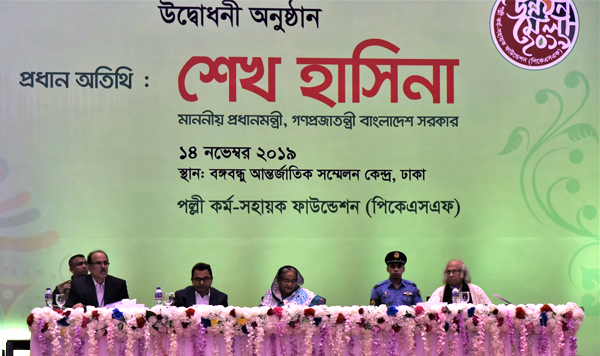 The week-long fair has been organised to help micro-entrepreneurs of the country to expand the market for the products they make with financial and technical assistance the PKSF under its various programmes.

Advisers to the Prime Minister, cabinet members lawmakers, foreign diplomats stationed in Dhaka, distinguished personalities as well as top government and army officials were also present at the ceremony that began at 10:00am. Development workers of PKSF’s Partner Organisations from across the country also attended the event.

At the ceremony, former Agriculture Minister Begum Matia Chowdhury was honoured with ‘Lifetime Achievement Award’ for her unparalleled contribution to the welfare of farmers, poverty reduction, agricultural development and establishment of human dignity. Prime Minister Sheikh Hasina handed over a crest, a letter of appreciation and a cheque to Begum Matia Chowdhury.

Speaking as the Chief Guest, Hon’ble Prime Minister Sheikh Hasina said the Awami League government had always taken up development programmes for the welfare of the general people of the country. Her government has all along given highest importance to poverty alleviation.

As a result of the various multidimensional programmes taken up by the government, poverty rate has come down to 21 per cent in 2018 from 41.5 per cent in 2006, she said.

She expressed hope that the poverty incidence would fall below 15 percent during the current tenure of her government.

Sheikh Hasina also noted that the PKSF has come out of the purview of microcredit programmes and has directed its focus on the overall development of the people instead.

The Prime Minister expressed her hope that the Development Fair for exhibition and marketing of the products made by the members of PKSF’s programmes and projects will take an institutional shape in future.

In his address as the Special Guest, Finance Minister AHM Mustafa Kamal said that PKSF’s efforts to connect the marginalised people with the mainstream economy had been largely successful. When PKSF was established by the government in 1990, the poverty rate in the country was 58.8 per cent, which has now come down to 21.8per cent, he said, adding that PKSF made a huge contribution to this success.

Addressing the ceremony as its Chair, Dr Kazi Kholiquzzaman Ahmad said that the PKSF, having broken out of microfinance-only programmes on instructions of Hon’ble Prime Minister Sheikh Hasina, has evolved into an appropriate financing organisation in line with the Declaration of Independence and Vision-2021of the government.

Alongside poverty reduction, PKSF has been able to create around 1.8 million micro-entrepreneurs, he noted.

PKSF Managing Director Mohammad Moinuddin Abdullah said PKSF’s operations complement the government’s poverty reduction efforts, including its target to achieve the Sustainable Development Goals by 2030. He also expressed his hope that the overall government support to PKSF programmes for poverty reduction and sustainable development of the poor will increase in future.

A total of 190 stalls of 125 organisations including PKSF’s Partner Organisations from all over the country, government and non-government organisations, research and IT institutions and service providers are taking part in the fair.