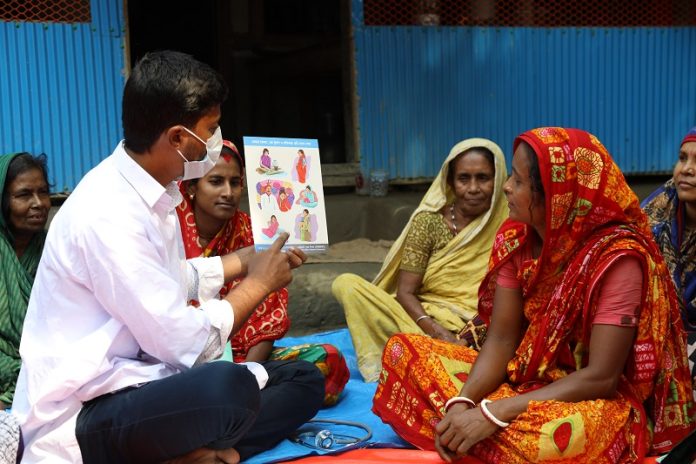 For a lack of strong voice and awareness about their entitlements, extreme-poor people often fail to access various services. PKSF’s Pathways to Prosperity for Extremely Poor People (PPEPP) project applies a twin approach to address this. First, the project is mobilising the extremely poor people through the prosperity Village Committee (PVC), Mother and Child Forum, Disability Forum, and Adolescent Forum and raises awareness on different issues like available social safety net programmes, services, and opportunities and conducted social and behavioral change communication. Second, it builds linkage with public and private service providers through grassroots advocacy. To do this, the project adopts ‘Service Delivery to Rights’ approach, and engages and sensitises community people as well as relevant stakeholders to ensure participant households’ access to safety nets, services and opportunities.

Community mobilisation interventions under PPEPP are aimed at contributing to the demand for local government agencies to allocate existing resources more equitably and push the central government for greater resource allocation. Community-level work with extremely poor people and the wider community builds social support and changes the social norms that exclude women, girls, people living with disabilities and others, limiting their access to various government and non-government services and opportunities.

Each platform has its specific objectives, but they also deal with some common issues such as awareness on entitlements, resilient livelihoods, nutrition and primary healthcare, climate change effects, disability, gender equality, and various social vices such as dowry, child marriage and domestic violence.

Establishing sustained and alternative IGAs
PPEPP aims to ensure food security at the 215,000 target extreme poor households by engaging them in diversified income-generating activities both in farm and off-farm sectors.

As community mobilisation works in coordination with other components, it is not just about connecting the extremely poor people with income but also about how this income can be sustainable. In this regard, initiatives have been taken to link the extremely poor people with various government and private services and support. Extension services of the government which are provided by the Department of Agriculture, Fisheries and Livestock of the Government distributes fertilizers, seeds, and vaccines free of cost or at a fair price and provides technical assistance at the grass root level. Community mobilisation is working to make these services and facilities accessible to the poorest of the poor. Also working to create links with private entrepreneurs, through which they can easily get the necessary materials for production.

Besides this, community mobilisation has been working to include the extremely poor people with various technical and vocational training from the government.

“With linkage support from Prosperity project, I received training on livestock rearing and fish farming from the government’s livestock and fisheries departments in Ashashuni Upazila. I now have good relations with them. Some of them also visited my house to give necessary technical advice, which was very helpful,” said Nargis Parvin, a PPEPP member from Satkhira.

Access to primary healthcare and initiative to improve nutritional condition

Malnutrition is a common phenomenon that causes 3.1 million child deaths every year (UNICEF, 2018) globally. To ensure primary healthcare, nutrition and WASH services for its members, Prosperity builds awareness both at service seeker and service provider levels. Priority target groups for these services are pregnant and lactating mothers, newborns, under-5 children, adolescent girls, the elderly, and persons with disabilities.

Various prevailing norms, values and prejudices still hinder women’s social and financial inclusion in many rural societies. Such societal barriers and superstitions render women lagging behind as they are often denied their rights to education and work. Findings from different studies conducted by Prosperity project suggest that despite being the primary bread earner in many households, women remain excluded from the household’s decision-making process.

PPEPP project addresses this in a number of ways, including by engaging women in social and financial activities across the community. Our trained and sensitised development workers support women to engage in mainstream IGAs and ensure their primary healthcare and inclusion in social safety net programmes through grassroots advocacy. Women are also directly linked with government and non-government service providers available in the locality to help them avail various services for free.

“I learned how women can contribute to the family and the community by attending the regular sessions and training. Prosperity project has encouraged and empowered me to become what I am today,” said Madhabi Rani (38) from Jaldhaka, Nilphamari, who has become a Union Parishad Standing Committee member after joining the project.

Disaster and climate change
Many Prosperity working areas are in climate-vulnerable regions that face frequent climate hazards such as cyclones, flooding, salinity and drought.

Almost every year, much of the gains made by the extreme poor people in these regions are undone by these climate shocks. In many cases, it happens because the extremely poor people are unaware of how to respond to such hazards and take preventive measures and mitigation strategies.

PPEPP sensitises participants and the larger community about disaster-related warnings, flags, signals and shelter homes, as well as the greater responsibilities of individuals, households and communities before, during and after the disaster. Besides setting up billboards on disaster preparedness at different visible places (markets, schools, government offices), the project engages the community to create mass awareness on disaster preparedness.